Home
Dogs
Dog Training
Male Vs Female Goldendoodle: Which Is Best For Your Home?

So, you’re getting a Goldendoodle puppy or considering adopting an adult dog from a shelter. But should you choose a boy or a girl? Surely there can’t be much difference between the two sexes, apart from the obvious.

Well, there are a few subtle differences between the sexes that you need to know about before you make your choice and bring your puppy home.

Generally, male Goldendoodles are taller and heavier than females.

That difference is more pronounced in Standard Goldendoodles when males can weigh as much as 40 pounds more than females. In smaller breeds, the size difference is not as great.

Goldendoodles come in several different sizes, ranging from toy, petite, and mini, through to medium and standard. There’s no difference in personality, temperament, or behavior between the sizes.

One thing that makes Goldendoodles so popular is their friendly, loving, temperament. And the good news is that both female and male Doodles have the same temperament.

That being said, in any dog breed, there can be quite a variation between the temperament of individual dogs, and Goldendoodles are no different. However, both sexes of Doodles are typically eager to please their owners, intelligent, loyal, and affectionate in equal measure.

Possible exceptions to that general rule are dogs that come from backyard breeders or puppy mills. These breeding operations generally don’t have their breeding dogs health-screened for genetic health problems and temperament. So, it’s a potluck as to how the puppies will turn out.

Also, puppies from puppy mills are not usually well-socialized and that can lead to problems with temperament, especially around small children and other pets.

Although male and female Goldendoodles have the same basic temperament, there can be variations in their personality.

Just like people, each dog has a slightly different outlook on life. So, you can take it as read that your Goldendoodle will be an active, friendly dog. However, whereas one dog might prefer lounging around in front of the fire, another might want to play a game of fetch outside in the rain instead.

A dog’s personality is molded to some extent by his early weeks and months. If you want a dog with a particular personality type, a reputable breeder will be able to recommend which puppy from a litter is the best choice for you. However, essentially, there’s no major difference between male and female Goldendoodle personality. 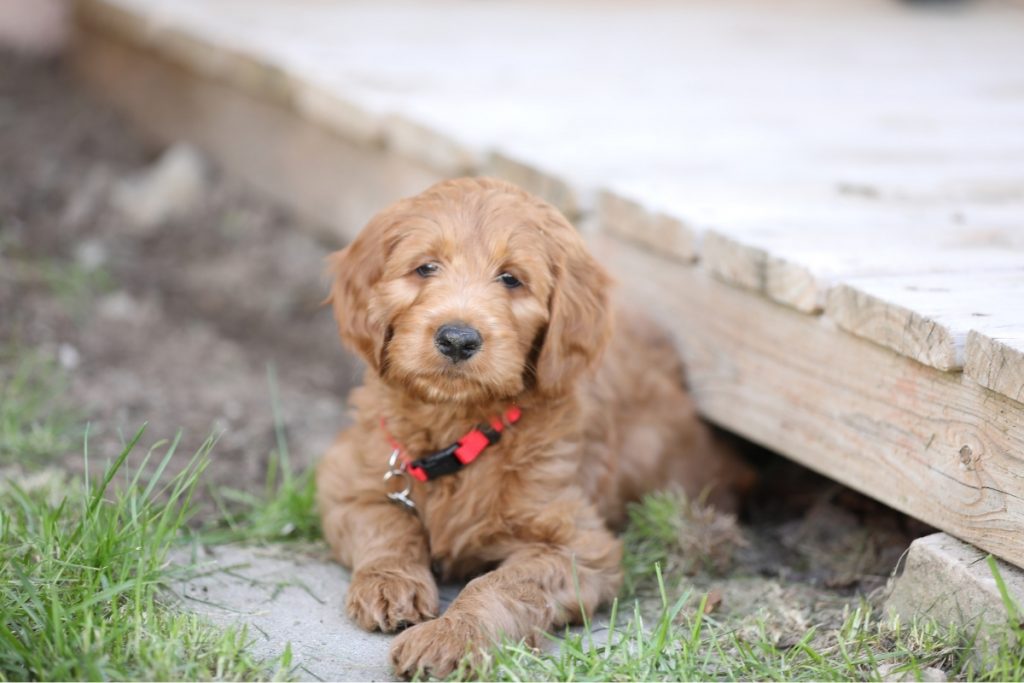 Some people say that male Goldendoodles are less compliant than females when it comes to training. However, most breeders and dog trainers don’t support that view.

Genetics directly influence the trainability (or not) of each Goldendoodle. Generally, this breed is easy to train, provided that the dog is well-bred. And there’s no difference in the trainability of male and female Doodles.

Both sexes respond best to positive, sympathetic training methods where desirable behavior and obedience are rewarded with praise and treats.

When it comes to undesirable behaviors, it’s usually a case of “boys will be boys!”

Male Goldendoodles tend to be guilty of humping your leg or a favorite toy, although females might do that, too. However, that behavior tends to diminish once the dog is desexed and is usually associated with the animal’s “teenage” phase when he goes through puberty. Also, as your dog reaches sexual maturity, you’ll notice that he starts marking his favorite patch in the backyard or even around the house.

Fortunately, there are a few enzyme cleaning products and pheromone deterrents that are quite effective at discouraging marking behaviors. That, in combination with sympathetic, consistent training, will usually solve the problem relatively easily.

Female Goldendoodles usually display some hormonal behaviors during their first few heat cycles that can be similar to their male counterparts.

That behavior can take the form of humping a favorite toy or marking specific places in the house. Other females may become “broody,” and false or phantom pregnancies are not uncommon. If your dog begins gathering toys, cuddling them, and circling in her bed, it’s worth having a chat with your vet, as it’s likely that your dog is experiencing a false pregnancy. Don’t panic – a simple injection can quickly return your pet to normal. 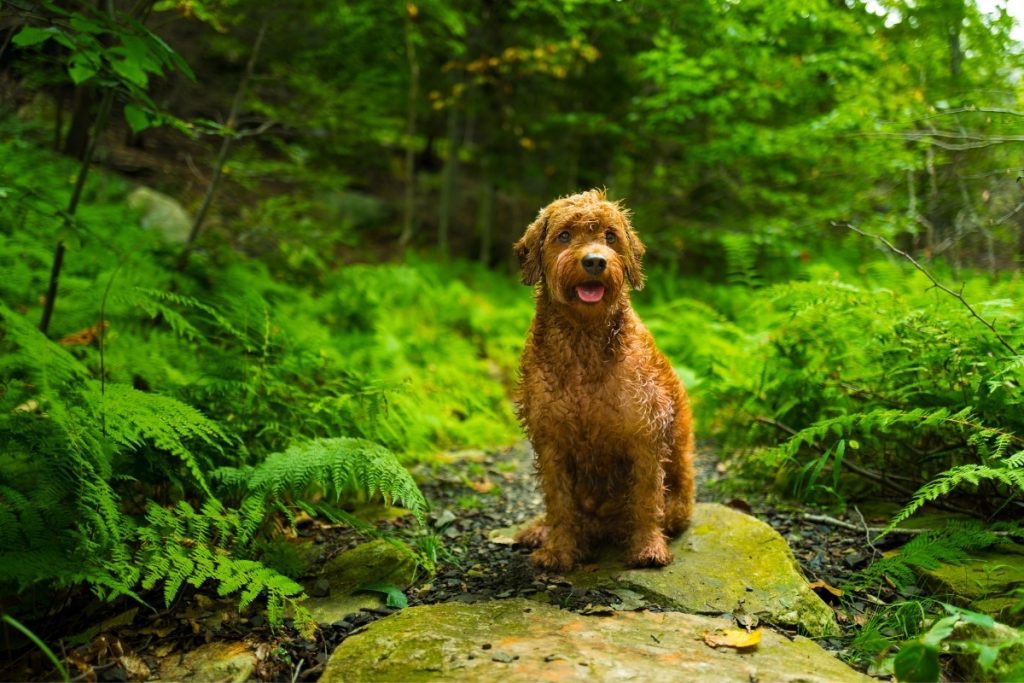 Goldendoodles are not generally aggressive dogs.

However, there are exceptions to every rule. Sometimes, a female that’s in heat or nursing puppies may become overly protective, which can manifest as aggression. Again, if you get a Goldendoodle of either sex from a shelter, the dog’s history may be uncertain. Abused dogs and those rescued from puppy mills can sometimes become aggressive, although that’s usually due to fear.

Goldendoodles are generally very light shedders thanks to their Poodle parent. However, if the individual puppy has inherited more of the Golden Retriever’s genes, the pup will most likely have a wavy or straight coat, which will shed more than a curly-coated dog.

Male and female Goldendoodles both need daily brushing to prevent their coats from becoming matted, and a six-weekly trip to the groomer for a tidy-up. Doodles that are brushed daily and clipped don’t generally deposit as much hair over your furniture as those that aren’t.

Goldendoodle health is largely dependent on the individual’s genetics.

A well-bred dog whose parents and grandparents are free from any genetic health conditions will most likely enjoy good health. So, when buying your Goldendoodle puppy, always buy your bundle of fluff from a reputable breeder who can show you evidence that both the puppy’s parents have been health-screened by a vet.

To find out more about the health screening requirements of the Goldendoodle Association of North America (GANA), check out their website.

So, essentially, male and female Goldendoodles experience the same general health problems. However, there are a few differences in their reproductive health.

Male Goldendoodles are more prone to suffer from bacterial infections that are related to the prostate. They can also develop prostate cancer, as well as cysts and tumors in their reproductive organs, which can be potentially fatal.

Those conditions are especially prevalent in male dogs that have not been neutered.

Female dogs can suffer from cancers that affect their mammary glands and uterus, especially in old age. Again, those conditions often prove fatal if not detected and treated early enough.

As with male Goldendoodles, we recommend that you have your female dog spayed after she has had her first season. Those problems will then not affect your pet.

So, to prevent the serious health problems that are associated with both male and female dogs’ reproductive systems, it’s best to have your Goldendoodle desexed once he or she reaches sexual maturity. Your vet will give you more advice on that.

Also, many breeders will insist that you sign a non-breeding contract before you are allocated a puppy. That document assures the breeder that you promise to have the puppy desexed as soon as it’s old enough and that you won’t use the dog for breeding. That ensures the quality of the puppies that are being produced and helps to stamp out backyard hobby breeding and the genetic health problems that can result.

So, you can see that there are no differences in the temperament and general health of male and female Goldendoodles.

However, each dog is an individual, so there may be some variations in dogs’ personalities, just as there are in people. The main difference between the sexes is in their size with male dogs tending to be larger than females.

When it comes to choosing between a boy or a girl Goldendoodle, it’s really just a matter of personal preference. 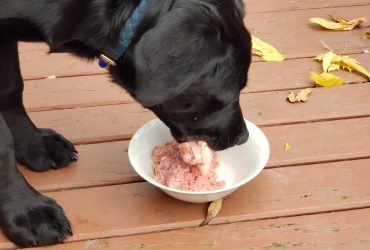 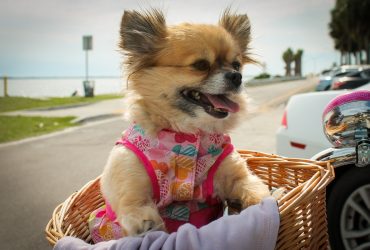 The best part of having a dog is finding great adventures to enjoy together. You …
July 24, 2021
More